Board games as an educational support. Has the project been successful?

Children have a natural ability to learn and quickly gain new skills. If, additionally, they are conferred in an easy way, for example in a form of a game, education can become pleasure.

I have been a fan of board games for years. Long time ago I started wondering how to apply their advantages to our activities. We are supporting several educational centers, among others the OurBridge in Khanke and Springs of Hope in Shariya. Recently we have opened our own Sardashty Center in the Sinjar Mountains. All of these places are visited by children who live either in camps for internally displaced persons or in small villages. They do not offer much entertainment. The very few existing playgrounds and they look as if created only to for the purpose of acquiring funding for a project “for children”.

The pupils of educational centers supported by us went through traumatic experiences and apart from education it is important to provide them with a safe and friendly educational environment. We can’t compensate them for years spent in captivity or erase horrific memories, but life is here and now. What we can do is try to find ways that will even for a moment help them to forget about the past.

What will the reaction be?

After visiting several places in which we spoke to people who already got our support and to those who wanted to request it, the time came to go to educational centers and begin our board games project.

You can read more about the first part of our trip to Iraq here: We are here to help.

Early morning we set off to the first center, the Springs of Hope, where we launched our project of supporting childhood education with board games. The conditions were difficult even for the locals. The containers which the center is built from have no air condition and the fans reduce the temperature to 40 degrees Celsius. We were a bit unsure how the kids would react to our proposal. I had already played board games with several Yazidi children, mainly with our friends’ sons and daughters. They all got the rules quickly and enjoyed playing very much. But playing with a familiar person in a home setting is different than doing it with strangers as a part of a center’s activities. I also kept at the back of my mind all the time that the kids I had in front of me were from families with many traumatic experiences.

Several locals volunteered to participate in our activities. Our team included two young instructors who came with me to Iraq to train the animators. The latter’s task will be to organize activities after we leave and collect the data that will help evaluate the success of our project. Our young instructors right away took some board games out of the bag and sat on the floor with local the instructors who also served as translators. After ten minutes I knew that we succeeded.

The dam did not crack, it blew up. The kids got absorbed in the games and the instructors were full of enthusiasm. Children kept asking for other rounds of games. We all forgot about the heat of 40 degrees Celsius. Two boys sitting on the side who initially seemed skeptical, after a moment started to play Abalone. It is incredible how fast kids get the rules.

After an hour we took a little break, but immediately a new group showed up. The news about a good fun spread fast. Finally the time came to talk about our first experiences with the center’s manager Lisa and the instructors. A decision was made to bring in one more instructor and a psychologist. In the afternoon of the same day we went to Alqush where the local teacher would also like to participate in the project. It will begin in September when the holidays are over. After discussing the details we did some sightseeing in the town. The history of Alqush is 2500 years old. During all this time the Assyrians, the Christians and the Jews lived side by side, and the omnipresent Middle Eastern mysticism is visible at every corner. It has been documented by Michal Bozek whose presence here is priceless for us.

The next day, we went to the Springs of Hope center in Shariya. After a discussion with instructors and a young psychologist specializing in childhood psychology we could start another day of activities. The man told us about his experiences with the center’s pupils. He works with the most difficult cases, such as children who were sexually abused or groomed for suicide attacks, beaten and tortured. As Lisa has put it: “We’ve got teenagers here who know how to behead a man but don’t know how to name the colors.” The psychologist has already included simple board games in the activities that he runs in the center. He intently listened to all the rules laid out during the first hour devoted only to instructors. I could observe how the number of notes and observations was growing in his notebook. When we were about to leave, we shook hands and he told us that we provided him with tools for work. For us it’s a success. The center received a set of 26 games and puzzles which we selected in Poland. We also prepared instructions in English which together with the project’s description and a questionnaire were prepared for each center and saved on a memory stick. In total we brought 75 kg of more than 120 games and puzzles. It took us two days before the trip to buy and prepare them for transport.

The next stop was the Ourbridge center in Khanke which you may know well. We arrived there in the evening and right away invited five instructors in. Apart from three volunteers from OurBridge, Shamoo and Khairi who look after our Sardashty Center came as well. We were sitting for several hours explaining the details of the project and the rules of each game. In the morning before classes we already had five well-trained instructors. The kids enjoyed the games very much. They were literally taking them away from each other. I had to intervene and ask my translator to explain to them that after we leave all the board games would stay and from then on they would belong to them. That calmed them down. I must add that it was a group of ten-year-olds, namely younger children than those that we worked with earlier.

In total, apart from instructors fifty children between 5 and 13 years old took part in the activities. The result looks very good. When we said that we would eventually like to produce board games in Iraq, everyone was stunned. Educational centers want to introduce games as a separate activity on a lesson’s basis.

Later on, we visited a woman with spine issues. In March, Dawid brought her medicines. At the time she couldn’t even get up from her bed. This time she was able to walk out of her tent supported by her son who held her hand. That was incredible. We left another set of medicines for her and our befriended physician Dr. Krzysztof Blecha, who travelled to Iraq with me two years ago, said on the phone that in three months she should be fine. Local doctors advised her to undergo surgery which they estimated to be 70% successful. 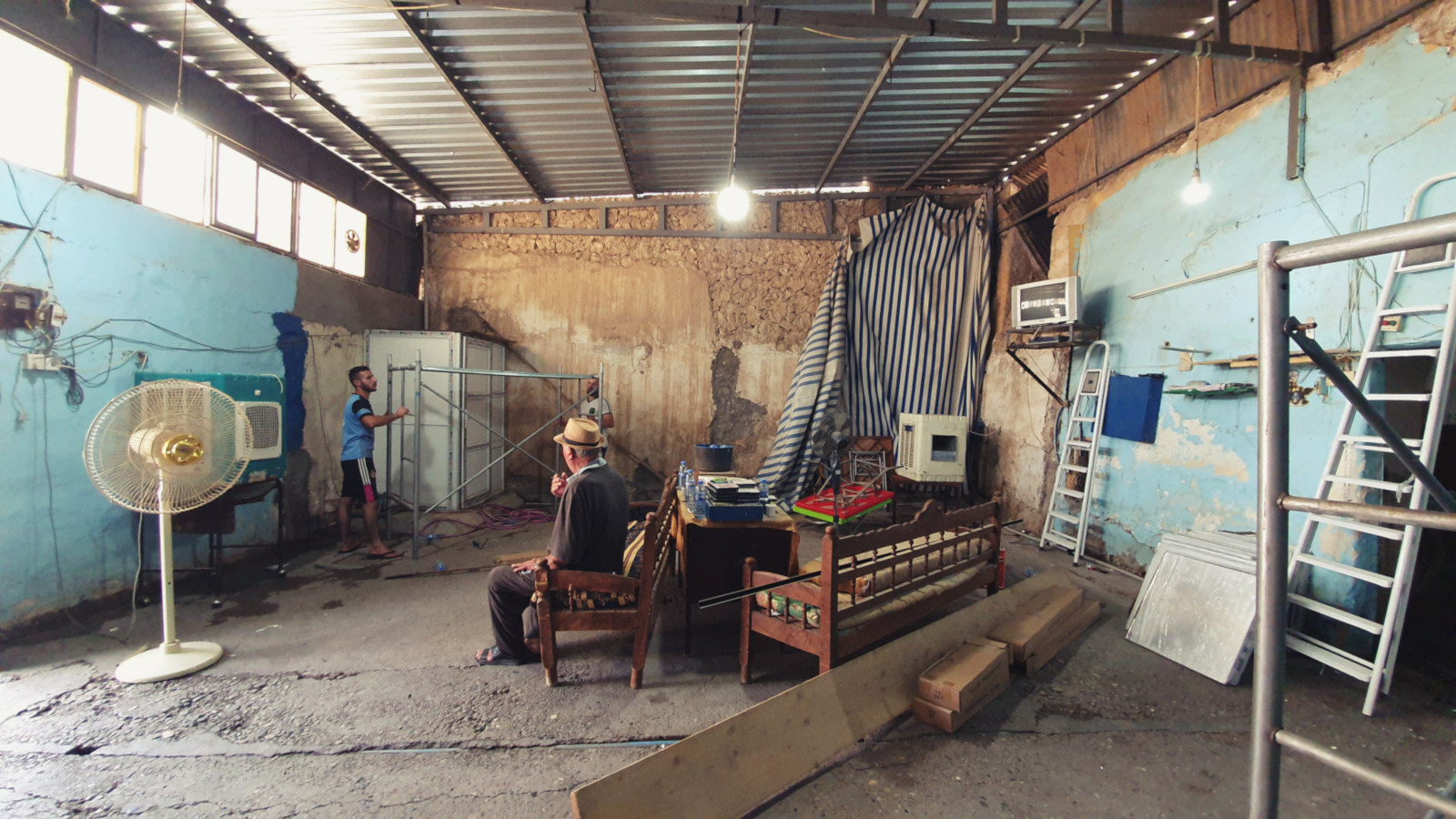 At the same time, a renovation of a tea shop that we visited a few days earlier began in Teleskoff. The works are moving on in full swing but we already know that additional sources will be needed to finish them off. The place is very neglected, but soon it can change beyond recognition.

We use cookies to ensure that we give you the best experience on our website. If you continue to use this site we will assume that you are happy with it. Learn more about cookies on allaboutcookies.org.Ok